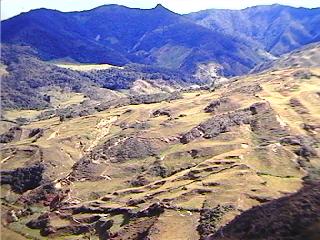 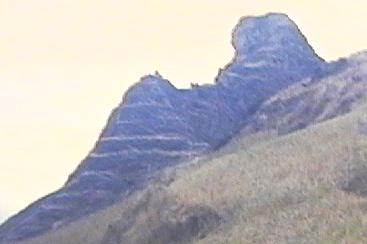 Terraces are common in the highland areas of the Saraguro region between 2000 and 3000 meters in elevation. Some are faced with field stone (photo right above) and others are generally not (photo left above). Only further research will reveal the degree to which terraces were used for agriculture or residence. At Milla (M) a terrace was apparently the location of Inca storage structures. Sites which include terracing that are indicated on the map include A, C, GU, GP, the vicinity of HL and HU, M, Mo, O, Sa, Sh, Cd, TL, U, and Y. Terraced sites on tops of hills are sometimes referred to as "pucará" (e.g. C and GP).

Much of the terraced area visible today was covered by forest a hundred years ago. The Saraguros have done considerable clearing of the forests above their communities, primarily to gain more pastures for their cattle. In some cases high, steep sided terraces were cut down to create a more gentle slope which would be safer for cattle. Today, however, there is some attempt in the area to preserve this evidence of long-ago inhabitants (who were probably the makers of most of the stone axes we have seen in the region). 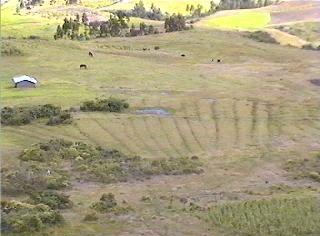 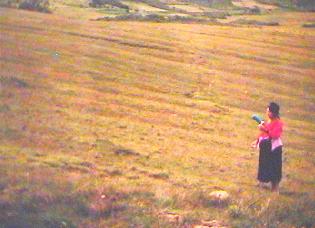 While terraces are found all over the highland region around Saraguro, ridged fields are not common. We have encountered them only on the slopes to the south of the community of Cañicapac. We visited this site in 1994 (Cp) with Aurelio Chalán Chal&aacuten, Angel Polivio Chalán Lozano, Manuel Guamán, Luis Japón Suquilanda, Luis Quizhpe Quizhpe, and Dave Belote.

Here is what we found:
As with the terraces, the ridged fields were covered with forest (scrub forest--"chaparral") until the last few decades and are thus evidence of a previous human occupation of the area.
They cover several dozen hectares in the vicinity.
The ridges are more or less parallel to each other and seem to be distributed in groups.
They vary between 3 and 5.4 meters in width. Some are as long as 150 meters.
Most are aligned with the slope of the hill upon which they were built, but some are on land with no slope or do not follow existing slopes very closely.
Maximum slope on which they exist is 18 to 20 degrees; most are on slopes of ten degrees or less.
Depths of the canals between the ridges is between fifteen and fifty centimeters.
As ancient terraces may cause problems for cattle raisers (see discussion above), ridged fields cause difficulties for those engaged in plowing.
Discussion to follow ...