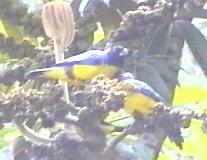 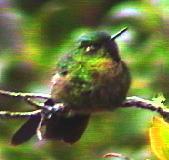 For more information on birdwatching in Saraguro please contact the Peace Corps volunteer Pelah Hoyt (pelahhoyt@hotmail.com) or the Fundación Wampra which is located across from the Central Park in the town of Saraguro.

The essential printed source on the 1600+ birds of Ecuador (excluding the Galapagos) and therefore on the birds of the Saraguro area for birders and other interested eco-tourists, and the background source for much of the material on these web pages (scientific and common English and Spanish names, likely distributions, endemic or threatened status, etc.), is the two volume set by Robert S. Ridgely and Paul J. Greenfield, published in 2001 at Ithaca by the Cornell University Press: THE BIRDS OF ECUADOR: STATUS, DISTRIBUTION, AND TAXONOMY (Volume I), and THE BIRDS OF ECUADOR: FIELD GUIDE (Volume II). This excellent set is usually available (as of early 2004), among many other places, at the Libri Mundi bookstore in Quito, and at electronic bookstores in the US.

Saraguro is uniquely located where two endemic bird areas intersect  the East Central Andean and the Tumbesian. The upper mountains are cloaked in cloud forest (2800  3100m) while the lower area is cut by a spectacular desert canyon (1200m)  both habitat types are within an area just 30 kilometers wide! The Tumbesian (EBA) has the greatest diversity of endemic birds of any area in the world. (sources??)

The montane cloud forests around Saraguro are part of the South Central Andes Endemic Bird Area. The South Central Andes EBA has suffered high levels of deforestation. Saraguros forests are recognized as a high priority for conservation by Birdlife International and the authors of The Birds of Ecuador: Status, Distribution, and Taxonomy (Robert Ridgely and Paul Greenfield 2001). In Saraguro, three indigenous communities are conserving some of this cloud forest in the Washapamba Protected Area. Birdlife International considers the Washapamba Protected Area important for the conservation of at least four endemic bird species and identified Washapamba as one of 5 Key Areas for conservation of these threatened birds. Your visit can contribute to the conservation of this important area.

The Tumbesian Endemic Bird Area, a desert region (click here for photos and discussion), contains isolated patches of trees and small ponds. The road into the canyon also provides access to the Rio Pakishapa and Rio Leon (which form the Jubones River at their junction). Highlights include the Tumbes Pewee, Pied-billed Grebe, Least Grebe, Common Gallinule, Black-chested Buzzard Eagle, Lesser Nighthawk, White-tipped Swift, Stripe-throated Hermit, Plain-brown Woodcreeper. More Tumbesian endemics are expected to be found in the area. There have also been unconfirmed sightings of Andean Condors. The area has not been explored but could offer new and unusual finds to an adventurous birdwatcher.

= Endemics (species whose entire population can only be found only in a less than 50,000 square kilometer area)
Source for information on endemic and threatened status: The Birds of Ecuador: Volume II, Status, Distribution and Taxonomy

Map references are provided with general locations of bird watching sites. The regional map used it is divided into 9 major sections (a-i)--see figure below. Imagine that each section is further divided into nine smaller sections with the same sort of alignment (A-I). Thus Washapamba (immediately below) is located in the "A" (north-west) section of the major section, "h".

"The most beautiful forest I've seen on the inner slopes of the Andes in 12 years of birdwatching in Ecuador" - One happy birdwatcher.

How to get there: The Protected Area is located 6 kilometers south of Saraguro on the Panamerican Highway. It is about a 3-hour drive south from Cuenca or an hour and a half drive north from Loja. Parking is available across the highway from the reserve.

Price: $5.00 per person. Tickets can be purchased at the Fundación Wampra, which is located across from the central park in Saraguro. Your visit to Washapamba will contribute to the conservation of this important area.

Notes: One hour or an entire day can be spent birdwatching in Washapamba. A well-maintained trail goes through the forest for about 1 km. The trail enters a small pasture with great birdwatching opportunities and then continues on to a huge Podocarpus tree. The more adventurous birdwatchers can continue up the trail towards the ridge. This part of the trail is steep and a bit rougher, but is much better than most Ecuadorian campo trails. Deeper forest birds such as the Chestnut-Crowned Gnateater can be seen here. The trail passes through a stand of large Clusia trees and an overlook that features an ancient Podocarpus montanus tree.

A pair of Northern Mountain Caciques nested in the small pasture clearing between October 2003 and January 2004. The Arrayan tree (Myrcianthes) at the forest entrance fruits between October and December. The Red-faced Parrot, Bearded Guan, and the Grey-Breasted Mountain Toucan are easy to see at this time feeding on the Arrayan fruits. It is possible to see 4 different kinds of hummingbirds at the same time feeding on the large Puchig tree when it blooms in January. Look for the large tree with the yellow blooms in the northern part of the pasture.

Washapamba is owned by three indigenous communities and protects 200 hectares of cloud forest. The Protected Area has the full support of community members. Unlike the many "paper parks" in Ecuador, the Washapamba forest is truly being conserved.
Washapamba has been described as a "MUST" stopover on road between Cuenca and Loja. 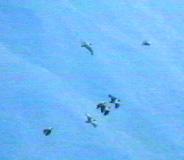 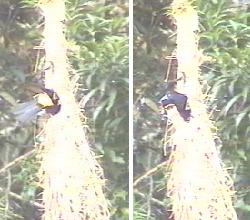 How to get there: Follow the Panamerican Highway south of Saraguro for about 3 km. Turn left onto the old Panamerican highway. After about 4 km a road turns off to the left up to Loma del Oro (also called Las Antenas). This 2-3 km stretch of road is not well-maintained. The birdwatching is good along the road. From the antennas at Loma del Oro take the trial that goes along the ridge. After about a half of a kilometer the trail splits. Both trails offer great birdwatching.
The trail to the right follows the continental divide for miles through cloud forest, , and páramo/treeline vegetation (click here for photos of the páramo region) . Mountain Tapir tracks are frequently encountered along the trail. Spectacled Bears have also been seen in the area. Note how the bears have chewed-up many achupallas (spiny ground-dwelling bromiliads) in the páramo around Tambo Blanco and beyond.
The trail to the left leads back to the community of Las Lagunas and the Huelemon ridge by way of Uritushinga. Uritusinga means "Parrot Beak" in Kichwa and is also the local name for the tree that produces quinine - an early cure for malaria. This area is expected to have many more species of hummingbirds. 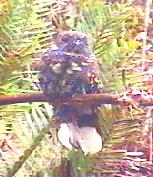 Habitat type: Native bushes along a creek mixed with pastureland.

How to get there: The trail can be reached by walking south of town along the Panamerican Highway. Turn left off the highway when you pass the shrine to San Vincente. This lovely trail is level and well maintained. It follows an irrigation canal through native shrubs along a small river. Birdwatching opportunities start about one kilometer along the trail and is especially good around the first bridge (about 2 kilometers up the trail).

Notes: This is a great place to see hummingbirds. It is possible to see all eight species of hummingbirds in a single outing. The best time to visit is between November and January when the bushes are in full bloom.

Habitat type: Desert canyon region cut by the León, Paquishapa and Naranjo rivers, with isolated patches of irrigated fields and of flood-plain vegetation including trees, and a few small ponds.

How to get there: Take the road that heads west out of Saraguro towards the small town of Tenta. About a half of a kilometer beyond Tenta you will reach a "Y". Take the road to the left. It leads through the highland indigenous community of Cañicapa then heads down towards the settlement of Papaya and beyond that to a crossing of the Paquishapa river and the settlements of Chayasapa (with ponds) and Chamical (in the heart of the desert canyon area) From Chamical one can proceed on foot, past the outline remains of an ancient structure (possibly pre-Inka) and to La Union--the junction of the Paquishapa and León Rivers .

Notes: The Zona Caliente around Saraguro is part of the Tumbesian Endemic Bird Area. So far only one Tumbesian endemic has been identified but more are expected to be found here. There have been unconfirmed sightings of Andean Condors over the years in this region. The area has not been studied and could offer some new and unusual finds for an adventurous birdwatcher.

How to get there: Follow the Panamerican Highway north from town. At the first bridge look for the White-capped Dipper. Right after the bridge, take the road to your right toward Ñamarin. Take the trail that is immediately to your right as you head up the Ñamarin road. The restaurant at the trailhead serves delicious traditional food and sells local crafts.

Notes: A Black-chested Buzzard Eagle nest was found in the cliffs in 2003. In the evenings owls are frequently heard.


Birds in Other area around Saraguro

Chestnut-breasted Coronet, Boissonneaua matthewsii (Above [east] of Ciudadela: Map hE 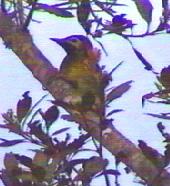